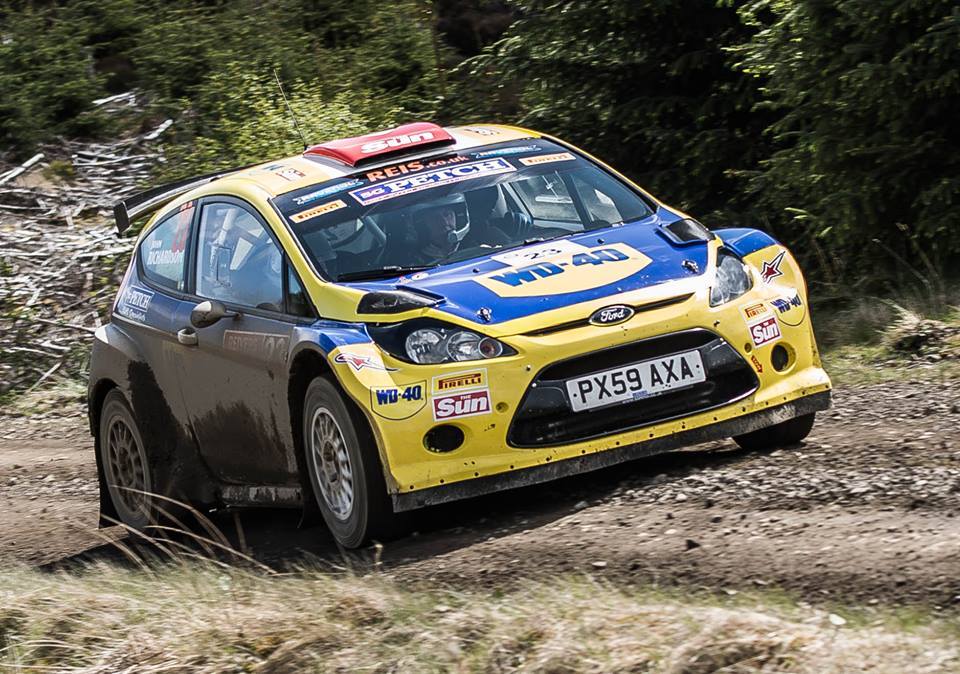 What a difference a day makes… Twenty four hours from brilliant, summer-like, sunshine, to winter-like, miserable rain. Although it was the 31st May it felt more like the 31st December….

Springwood Park, next to the River Tweed in Kelso, was the start/finish venue for the 2015 Jim Clark Reivers Rally and as crews assembled for the 08.00 start time the main topic of conversation was how quick and wet the forthcoming stages were expected to be. The rain would help to keep speeds down a little but it would also make the surface a little slippery too…

Highest placed ANECCC seed was Peter Stephenson, from Thirsk, in his Ford Focus WRC. At the start Peter was busy doing warm-up exercises as he felt the gloomy weather wasn’t motivating him enough. Peter then would “spend the day keeping my driving clean” and although he felt there was the odd slippery bit in places the morning’s exercises must’ve done the trick as he finished a creditable 4th overall. Peter still maintains his traditional 2nd overall in the championship but I expect he’s seeking to ascend to further glory…

Starting two places behind Peter was the legend from Malton, Steve Bannister. Steve had his usual Escort Mk2 and co-driver Louise Rae. Steve explained they were spending a lot of time during the event being on the limit. He was finding the stage surface difficult to read as there wasn’t many defining lines, possibly because they were mixed in with the four wheel drive cars and those cars were “spreading gravel everywhere.” A little time was lost on the last stage, Comb, with an indefinable steering issue on the Escort making some corners more difficult to turn into than he’d have liked. This problem caused some delay which dropped them down the order a little, however, they still maintain their overall lead in the championship.

Due to the re-introduction of conventional seeding Thirsk based Mat Smith and Barnard Castle’s Giles Dykes were running further down the field than they’d become accustomed to with their Proton Satria at number 22. Giles explained in great depth that they’d made a number of changes to the car’s set up but he was unsure if they’d improved matters. The speedo had been reading 183mph at one point on the faster bits…?? Mat likes the more technical stages and unfortunately they didn’t reach the end of what was probably the fastest stage of the day, Harwood. Better luck next time lads…

Another crew reacclimatizing to the re-introduction of conventional seeding are David Goose from Spalding and Richard Wardle from Pickering. They were running on the sump guard in places where they hadn’t expected to be and also found the early stages more slippery than expected. Further more, David had changed his style of pace-notes and was also adapting to these as he was going, making the day quite busy, and interesting. Eventually finishing just outside the top twenty at 23 overall was a satisfying reward for their day.

Alex Curran from Newton Stewart has the very experienced Cumbrian Heather Grisedale reading the notes and in spite of a puncture near the end of SS1, (probably a result due to the rough bits), which caused some suspension issues with the camber settings, they arrived at the finish so excited with their performance that Heather had plugged the intercom into the local radio station and they where singing along to the tunes as they booked into the final control… If it works for you, do it, I suppose…

Starting immediately behind were Penrith based Marcus Noble and Helen Hall in their historic Escort Mk2. After, similar to other crews, finding the end of SS1 rougher than planned they settled into a steady rhythm and would eventually finish 31st overall. Marcus and Helen have missed a number of the early championship rounds due to business commitments, however, it would good to see them back competing more often again.

Although reigning 2014 ANECCC Stage Rally champion Barry Lindsay from Spadeadam had Caroline Lodge from Brampton keeping him on the straight and narrow, their Peugeot 206 had other ideas. The car had an untraceable hesitancy on the road sections which cleared on the stages. “Rev it more”, was one suggestion. Other’s aren’t printable… Barry and Caroline would finish 32nd overall. Barry regains 3rd overall in the championship, whilst Caroline is 6th overall in the co-drivers’ table.

David Thirlwell and co-driver Graham Reader from Hexham were another crew who weren’t impressed by the rough bits. David felt he particularly struggled the entry and exits of the chicanes as these had cut up quite badly. This had cost them a lot of time and would eventually finish well down the field. However, a finish is a finish and more points are added to the tally.

Starting from a rather disappointing seeding was another man from Thirsk, Ben Cree. Ben had the unregistered Richard Shores in the passenger seat and both are very talkative, happy lads. The smiles weren’t as broad as normal at the service halt due to a LHR hub bearing failure. A possible cause, according to Ben, being the extra weight on that side…? The truthful cause probably being the rough bits at the end of SS1… Fortunately the bearing wasn’t too badly damaged and they were able to continue, but sufficiently enough to make life interesting for Ben on the long faster bits as the car was sliding around more than usual.

We have now passed the halfway mark in the championship. Six rounds completed, with five to go. With six scores to count towards the overall championship positions a number of registered competitors will now start to drop scores from the remaining qualifying rounds. An interesting 2nd half looks possible as a number of recent recruits are making their way steadily up the table. The current leaders will need to keep an eye out or risk being overtaken later in the year…

After six rounds the current points standings for 2015 are:-

Round 7, The DMACK Carlisle Stages Rally is on the 13th June. Full details and regulations are available on the rally website http://www.racrallychamp.org/Carlisle_Stages/carlisle_stages_home.htm

Round 8, The P&R Benn Greystoke Stages Rally is on the 12th July. Full details and regulations are available on the rally website http://greystokestages.co.uk/

Round 9, The SG Petch Tour of Hamsterley is on the 12th September. Full details and regulations are available on the rally website http://www.tourofhamsterley.co.uk/